Crunchy cucumbers with a tangy dressing, this Quick Cucumber Salad With Vinegar takes only minutes to put together and is the perfect side dish any time of year. This simple recipe is also a wonderful topper for your burger or sandwich when you want to add a zesty crunch. It's so light and refreshing, and it is one of my favorite salad recipes to make (and eat)!

Choosing the Kind of Cucumber

What's the best kind of cucumber to use? I prefer English cucumbers over standard cucumbers as their skin is a little thinner and they have fewer seeds. But regular ones are also delicious and more readily available. Just make sure you're using a crisp cucumber as you don't want to use a softer one.

First, slice cucumbers evenly in less than ¼" thick slices with a sharp knife. The thickness is up to you though as some prefer extremely thin slices. If you have a mandoline slicer, this is very quick to do. Add the cucumber slices to a medium bowl, preferably one with a lid.

Next, thinly slice the red onion and add to the bowl. You can also use a white onion but I wouldn't use a yellow one as the best flavor is with a sweet onion.

Next, it's time to make the dressing. Add the olive oil, apple cider vinegar, cold water, sugar, dill, salt and pepper to a mason jar. Put the lid on and shake vigorously. If you don't have a mason jar with a lid, simply add the ingredients to a small bowl and whisk well. I recommend using apple cider vinegar but you can also use red or white wine vinegar. Sprinkle the sesame seeds and red pepper flakes on top if you are using them, and serve.

This perfect salad stores well for up to five days in an airtight container in the refrigerator. We like to make a big batch and then serve it as a side for our lunches and dinners...and sometimes for breakfast as well. The great thing is that this simple cucumber salad tastes just as good on days two through five!

Do you leave the skin on the cucumber for the salad?

That's completely up to you. I always leave the skin on but you can peel them if you prefer. English cucumbers have thin peels and even regular cucumbers' peels aren't too thick. An option is to peel strips down the length of the cucumber so that when it's sliced it looks like little stripes on the side. This won't really affect the flavor - it's just pretty to look at.

How important is it to have fresh cucumbers?

It's super important that your cucumbers are as fresh as you can get them. Cucumbers that have been in the refrigerator for a week aren't going to be the tastiest to use. Check out your local farmers market for the best cucumbers!

Can I eat this cucumber salad immediately after making it?

Of course. But I think it tastes even better the second day once the cucumber slices have time to absorb all the flavors.

This tangy and cool cucumber salad is a great, classic side dish for any summer meal. The sliced cucumbers and onions also make an amazing topping for burgers and sandwiches. It's quick to make and tastes better each day. It's also one of my favorite side dishes to bring to a barbeque.

Looking for more recipes for easy salads? Check out: 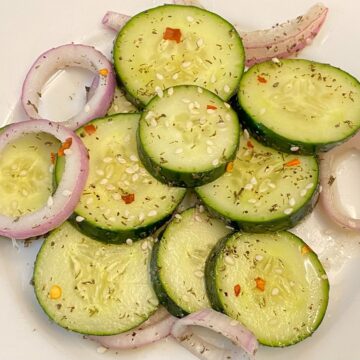 This quick, easy and tangy cucumber salad recipe is a perfect side dish to almost anything. It's also a delicious topper on a burger or sandwich.
5 from 1 vote
Print Recipe Pin Recipe
Prep Time 15 mins
Total Time 15 mins
Course Side Dish
Servings 8
Calories 39 kcal