If you are looking for a Healthy Vegan Apple Crisp, this recipe if for you! It is sweetened with maple syrup instead of brown sugar and doesn't contain any oil.

When apple season comes around, I love making an apple crisp. It's much easier to make than a pie since you don't need to make a dough or crust. But it has the same delicious apple and spice flavor. This is a tasty vegan dessert that you can feel good about eating!

To start, preheat the oven to 350 degrees. Prepare the apples by peeling them and thinly slicing them. I like using a mixture of tart and sweet apples, especially after some apple picking at the farm. I love Fuji, Pink Lady, Honeycrisp and Granny Smith apples but use whatever you have on hand.

Place the apple slices in a large bowl and add in the lemon juice, maple syrup, cornstarch, cinnamon, nutmeg, and salt. If you do not have any cornstarch, you can use arrowroot powder instead. Stir until well combined.

Pour the apple mixture in an even layer in a 9" x 13" baking dish. You can use a smaller dish if you want and that will give you a thicker layer of apples.

Cover with aluminum foil and bake for 30 minutes.

While the apples are baking, prepare the apple crisp topping. In a medium bowl, add the oats, whole wheat flour, white flour, cinnamon and nutmeg and mix well. Pour in the maple syrup and mix well.

Take the baked tender apples out of the oven. Use your hands to crumble up the crisp topping on top of the apples. You do not want to have any large pieces. As there is no oil or vegan butter in this recipe, the topping will not be too crisp. If you have big chunks of the crumble mixture, it will be chewy.

Place the uncovered baking dish back in the oven and continue baking for 25 minutes. Take the apple crisp out of the oven and let cool for 5-10 minutes before serving.

To take it up a notch, feel free to top with vegan vanilla ice cream or whipped cream. Store leftovers in an airtight container in the fridge for up to 3 days.

Can I keep the apple skin on?

Sure! I prefer to peel the skins but you can definitely leave them on. You can also just partially peel the apples.

What's the difference between apple pie and apple crisp?

But use sweet, tender apples with cinnamon. But an apple pie uses two pie crusts, one on the bottom and one on the top. An apple crisp doesn't use any crusts but it has an oat crumble on top.

What's the difference between apple crisp and apple cobbler?

Apple cobbler has a sweet, cakey layer on top of the apples instead of an oat topping.

What's the best type of apple to use?

Use your favorite apple and feel free to use more than one flavor. I'm not a fan of McIntosh apples so I usually don't use them. I like mixing a few sweeter apples with a couple tart apples together for this apple crisp recipe.

Can I use quick oats?

Old fashioned oats work best but if you only have quick oats, you can use them. Steel cut oats do not work in this recipe.

Can I use oat flour or almond flour?

Oat flour definitely works in this apple crisp. I have not used almond flour but it might make the crumble topping a bit tough and dense.

Can I make this into a gluten-free apple crisp?

While I have not tried it, you should be able to substitute the whole wheat and white flours for gluten-free flour.

This Healthy Vegan Apple Crisp is the perfect fall dessert. The apple layer is sweet and a little gooey. The crispy topping if full of cinnamon spice. While apple desserts are great to eat all year long, they are especially wonderful with fresh apples during the autumn season. This healthy apple crisp doesn't use any processed sugar and doesn't have any added oil so there's also no added guilt.

Interested in other vegan dessert recipes with fruit in them? Check out: 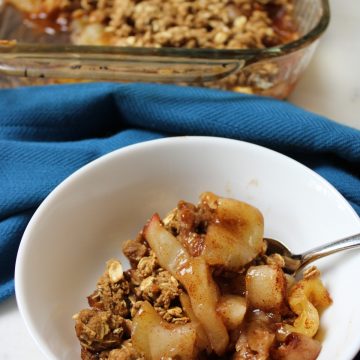