These Easy Vegan Rice Krispie Treats are one of my all time favorite desserts. They're sweet, gooey and crispy and can be customized with add-ins...although the traditional way is my favorite.

Luckily, they make vegan marshmallows (without gelatin) so I can have a vegan version of my favorite treat. Made with simple ingredients, these Easy Vegan Rice Krispie Treats recipe takes only about 10 minutes to make so you can whip up a batch anytime.

I use Dandies brand of vegan marshmallows. They are soft and delicious and taste better than traditional marshmallows. Trader Joe's also makes marshmallows without animal products but they are seasonal so you usually can't get them year round.

Vegan marshmallows don't melt quite as easily as regular ones so buy mini marshmallows if you can find them. If you can't, for best results I recommend cutting them into halves or quarters for this recipe.

First, prepare your pan. You can either (vegan) butter it or line it with parchment paper. I like using a 9x13 pan, but if you prefer thicker squares then you can also use a 9x9. Next, prepare your marshmallows but cutting them in halves or quarters. It's much easier to use a pair of kitchen shears than a knife.

Next, put the vegan butter in a large pot over medium to medium-low heat. My favorite brand of vegan butter is Earth Balance. It's available in both a tub and in butter sticks. Once melted, add the marshmallows and stir continuously.

IMPORTANT: Do not cook over high heat. Do not let the vegan butter burn. The very first time I made these I was distracted and not stirring and it burned. The only word to describe it was rancid and I had to throw the whole batch out. I haven't made that mistake a second time!

Once the marshmallows are melted and gooey, remove the pan from the heat and stir in the vanilla extract. Next, add the 5 cups of vegan crispy rice cereal to the melted marshmallow mixture and stir to combine.

Technically, Kellogg's Rice Krispies aren't vegan so you'll want to find a vegan alternative crispy rice cereal. The Vitamin D3 that's added is derived from animals. Most generic varieties of the crisp cereal are vegan so just check the nutritional information. Check out Are Rice Krispies Vegan? for more information.

Once it's all combined, scoop the cereal mixture into the prepared baking dish. You'll want to press it down to even it out. The easiest way to do that is to use a piece of parchment paper in your hand to press it on the crispy cereal mixture with.

Allow to cool for about 20 minutes before cutting into squares. Store in an airtight container for up to 3 days at room temperature. Do not refrigerate or they will get extremely hard.

As I mentioned, I like my Rice Krispie Treats the traditional way. But there are a lot of fun mix-ins and toppings you can add.

Can I use coconut oil instead of vegan butter?

While I haven't tried it, I've seen several vegan rice krispie treat recipes that use coconut oil instead of vegan butter. It will definitely give your krispy treats a coconutty flavor but that could be delicious with a chocolate drizzle on top.

Why can't I use regular marshmallows?

Regular marshmallows contain gelatin. According to Peta.org, "Gelatin is a protein obtained by boiling skin, tendons, ligaments, and/or bones with water. It is usually obtained from cows or pigs. Gelatin is used in shampoos, face masks, and other cosmetics; as a thickener for fruit gelatins and puddings (such as Jell-O); in candies, marshmallows, cakes, ice cream, and yogurts; on photographic film; and in vitamins as a coating and as capsules, and it is sometimes used to assist in “clearing” wines. Gelatin is not vegan."

Where can I find Dandies vegan marshmallows?

You can buy Dandies in store at Whole Foods, Stop and Shop and more. You can also buy them online on Amazon.

Rice Krispie Treats are a childhood favorite but you don't need to be a kid to enjoy them. This is one of my favorite vegan dessert recipes. The no bake dessert is super easy to make, needing only vegan crispy rice cereal, vegan marshmallows, vegan butter, and a little vanilla extract. They are quick to make so you can satisfy your sweet tooth in minutes. 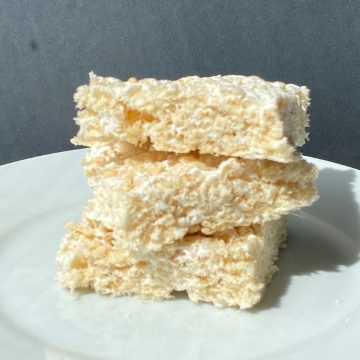