These are The Best Vegan Snickerdoodles! These cookies taste just like traditional snickerdoodles but without the dairy and eggs. The chewy cookies are soft on the inside with a crispy edge on the outside. They are covered in a delicious cinnamon-sugar mixture and baked to perfection. This vegan snickerdoodle recipe comes together in minutes so you can have your cookie fix anytime.

This vegan dessert recipe calls for simple ingredients and does not use a flax egg or any egg replacers. I am not a fan of using a flax eggs in my baking. I find that it makes baked goods really dense and sometimes gummy. If you use the right combination of ingredients, it's really not needed.

NOTE: If your vegan butter isn't softened, just leave it out at room temperature for about fifteen to twenty minutes.

To start, preheat the oven to 375 degrees f. Next, prepare your cookie sheet by lining with parchment paper. Prepare the cinnamon sugar coating by mixing the 3 tablespoon of sugar with 2 teaspoon of cinnamon in a small dish and set aside.

In a stand mixer, cream together the vegan butter and the granulated sugar. You can also use an electric mixer and a large mixing bowl. Add in the non-dairy milk and vanilla extract and beat for an additional minute. You can use any non-dairy milk but my favorites to use are soy milk or almond milk.

Wondering about the different kinds of vegan milk and their uses? Check out Vegan Milk Options - A look at Non-Dairy Milks.

Next, add half of the flour to the wet ingredients and mix until almost combined. Add the remaining dry ingredients (flour, cream of tartar, baking soda, salt and sugar) and mix until combined. Do not over mix. I like to add cinnamon to the snickerdoodle cookie dough in addition to the coating mixture to ensure plenty of flavor.

Bake in the preheated oven for 13 minutes. For best results, let the cookies rest on the baking sheet for about 3 minutes before transferring to a wire rack to cool completely. These cookies can be stored in an airtight container.

Snickerdoodles are delicious cookies on their own. But you can also use the cookies to make more decadent treats.

These chewy cinnamon cookies are a favorite in our house. This easy recipe, made with simple ingredients, is perfect for any time you're in the mood for a sweet treat. Enjoy!

Looking for more recipes for vegan cookies? Check out: 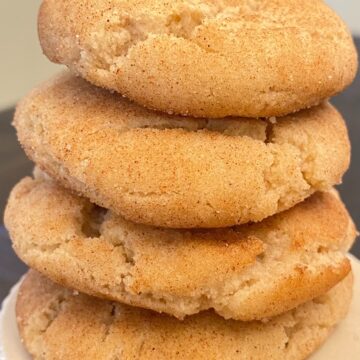 Full of cinnamon goodness, this easy vegan snickerdoodle recipe will quickly become a family favorite. It's soft on the inside with a little bit of a crunch on the outside.
5 from 1 vote
Print Recipe Pin Recipe
Prep Time 10 mins
13 mins
Total Time 23 mins
Course Dessert
Servings 26 cookies
Calories 108 kcal