This Easy Vegan White Chili Chowder is my favorite "chili" recipe. It's chili, it's chowder, it's both! This recipe has the simple ingredients of cannellini beans, corn, and potatoes but it's the spices that make it unique. Cinnamon? Yes, please!

I love soups, stews, chowders and chilis of all kinds but this vegan version of a chowder is one of my favorites.  Years ago, before giving up meat, I had a white turkey chili that had cinnamon in it and I absolutely loved it. I wanted to recreate the flavors in a vegan friendly way.

This recipe has the potatoes, corn, and creamy texture of a traditional chowder with a twist of chili flavors. And while it is a creamy soup, there isn't any dairy-free milk or vegan butter in it. Somehow, my kids don't love regular chili. But this recipe is one that they all happily eat. I think it's the lack of tomatoes that makes it more appealing to them. Or maybe it's the cinnamon. Or it's the mellow flavors. Whatever the reason, they love it.

This chowder comes together quickly. In a large soup pot, heat the olive oil over medium-high heat. Add the onion and sauté for about 5 minutes. Add the garlic and cook for an additional minute. Stir in the chopped green chile peppers (which are very mild) and the seasonings and stir to combine thoroughly.

Then add in the canned cannellini beans (make sure you drain and rinse the cannellini beans first), the 4 cups of vegetable broth, the potatoes and the corn kernels. I usually use frozen corn but fresh corn from corn cobs would be delicious as well. You would need the kernels from approximately two ears of corn to equal the 1 cup that the recipe calls for.

This vegan soup is very versatile as you can also use any type of potatoes - russets, Yukon gold potatoes, and red potatoes all work very well. Bring the pot to a boil and then lower the heat and simmer for 20 minutes.

Remove the stock pot from heat and use an immersion blender to puree to your desired consistency. I like to keep a good amount of potato chunks in it. You can also use a regular blender and carefully blend it in batches. If you want your chowder to be extra chunky, you can use a potato masher instead. It probably won't be as creamy this way however.

You can choose not to puree at all and it will be more like a hearty soup. Serve with some biscuits and a salad for a delicious meal. Need a good biscuit recipe? Check out these Vegan Herb Drop Biscuits. They are so much quicker and easier to make than traditional biscuits that you have to roll out and cut.

If you have any leftover, store the cooled chowder in an airtight container. It should last up to four days in the refrigerator.

Can I turn this into a slow cooker recipes?

Yes. After sautéing the onions, garlic, chile peppers and spices, transfer it with the remaining ingredients to a slow cooker. You can cook it on high for 4 hours or low for 6-8 hours. Then you can blend it as stated earlier.

How can it be creamy if there isn't any non-dairy milk in it?

The creamy base in this chowder comes from pureeing the potatoes and cannellini beans.

I love celery. Can I add some to this?

Sure. I haven't tried it with celery but feel free to add about two stalks worth of celery.

Can I add some vegan cheese to this?

If you are a cheese lover, feel free to add some shredded vegan cheese on top.

I noticed there isn't any nutritional yeast in this recipe. Can I add some?

I am not a fan of nutritional yeast so I don't usually add it to my cooking. If you love it and want a little extra flavor, feel free to add some to the recipe.

This White Chili Chowder is perfect once the cooler months come around. I enjoy serving it with some cornbread, biscuits, or crusty bread. In a pinch, tortilla chips work well too! Or, how about in a bread bowl? I hope you enjoy it! 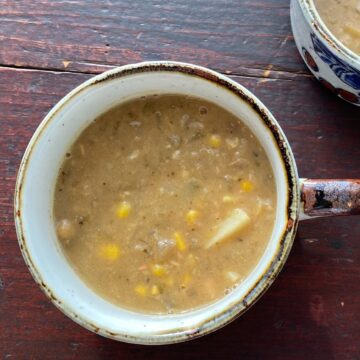 Serve with shredded cheese for the non-vegans.